The Ladder of Inference

The Ladder of Inference

The ladder of inference is a simple and yet insightful model that suggests our actions are determined via a causal loop of inference or opinion about a situation based upon a tiny piece of data, and occasionally an absence of data.

We choose exclusively to tune into certain data and we ignore the wealth of supplementary data that is available to us. We fail to test the data to validate the conclusion that has formed in a nano second and we form a belief about a person or an event the believe influences our actions.

A story about the ladder of inference

Later in this article I will describe how I saw and heard this happen with a trainer that I was co facilitating with recently, the impact on the relationship with a member of the group and subsequently her performance.

How does the ladder of inference work?

Perhaps we are at a meeting. There is an event that we are a part of and we observe. From there we step onto the first rung of the ladder. 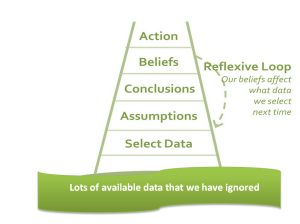 We select certain data to pay attention to, we pay almost no attention to the rest of the data that is available to us

We very quickly add meaning to that data

And we make an assumption about that data and its meaning

Then, informed by the conclusion we adopt a belief. Our belief guides the action we take.Those beliefs affect what data we select next time and so the belief is fed influencing our actions

The Ladder of Inference in Action

Recently I was working with another trainer, we were co-facilitating an event. One of our learners, we’ll call him Brian, asked lots of questions; I interpreted this as curiosity, perhaps needing confirmation of his understanding of concepts that were new to him.

During a session that the co-facilitator was delivering Brian asked the facilitator for an example of how reciprocation would work in his environment.

The facilitator gave an example and Brian commented that he didn’t think that would work for him.

The facilitator gave another example (perhaps she could have asked him at this stage for some examples of where he had felt indebted to a colleague who had helped him during a crisis in the past). The example she gave was a little weak and led Brian to say “The probability of that happening at my place of work is Zero”

The facilitator focused on this data and assuming Brian was being difficult formed the belief that he was probably going to continue being difficult and said to him “I suggest you take some time out and if you cannot continue without being disagreeable to everything I say then I suggest you go back to your desk at work”.

Using the Ladder of Inference

You can’t live your life without adding meaning or drawing conclusions. It would be an inefficient, way to live. But you can improve your communications through reflection, and by using the ladder of inference in three ways:

Trainers, How well greased is your ladder?

As we watch, listen and work with a variety of learners we are constantly creating our own meaning about their actions based on minimal data. Learning new concepts can be frustrating. Frustration has many forms, if we keep a well-greased ladder we will very quickly form the wrong conclusions and act upon them.

“If the doors of perception were cleansed every thing would appear to man as it is, Infinite. For man has closed himself up, till he sees all things thro' narrow chinks of his cavern.” William Blake,

We get it badly wrong at times!