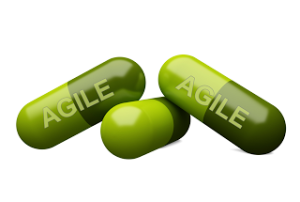 What is it that drives agile performance from some of our customers and results in a hierarchical trail of delayed decision making in others?

Our work with small  innovative, or large and complex business’s often reveals that it’s not simply the size of the organisation that impacts it’s agility although silo’s created by vertical structures where control resides at the remote top has an obvious impact on responsiveness.

What is agile performance?

Agile methodology is an alternative to traditional project management, often used in software development. It helps teams respond to unpredictability through incremental, iterative work conducted by self organising teams in regular, repeatable work cycles, known as a sprints or iterations.
Agile communications consist of horizontal conversations avoiding traditional channels and hierarchical bureaucracy. Agile enables knowledge workers to learn from the experience of others in the team and share their experience in a non judgmental environment that assumes collective responsibility for outcomes.

It also avoids the retrospective project postmortems through regular feedback mechanisms there is greater opportunity to identify trends, and initiate problem solving to address issues.

This is double loop learning in action because it enables challenge and modification or rejection of a goal in the light of experience. Double loop learning challenges traditional thinking and process and recognises that often the way a problem is defined and solved can be a source of the problem.

Outside of traditional project management applications of agile, smaller companies can be quicker to adapt – their agility is the outcome of leaders who are closer to transactions and can often see how individuals, environmental issues, market changes and the actions of a competitor impact the bottom line. They recognise the feedback loop and take decisive and swift action. They instantly adjust to bad results and repeat behaviour that produce positive results, through frequent reassessment and adaptation of plans.

The UK public sector made a commitment to using agile methodology for software development projects. As a tax payer it should be music to my ears that agile will reduce the risk of ICT project failure. As a business owner I am enthusiastic about the greater efficiencies that come from the ability to interact with the public sector via a number of channels which are collaborative and swift to respond.

The Bell Curve and Forced Distribution

The public sector uses a forced ranking system for formal performance appraisal. Forced ranking, the system championed by Jack Welch in the 1980s, has long attracted controversy. Debate raged as many large companies adopted the practice of using a bell curve to rank employees while critics maintained forced ranking crushed morale, stifled innovation, and led to self serving behaviours and competition among employees. 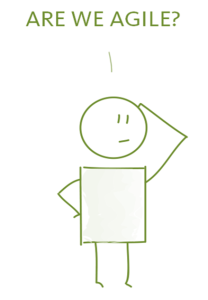 Agile thrives on commitment from individuals formed into innovative teams who adapt to the ever accelerating pace of change and on open, transparent, collaborative behaviours among individuals in teams – forced ranking typically produces the opposite behaviour within teams of unhealthy internalised competition because ranking people pits individual employees against each other effort and ingenuity are turned inward to get ahead of colleagues. Team spirit is destroyed, as individuals concentrate on their own performance at the expense of the overall system. The system simply does not foster collaboration in teams because ultimately it’s every man for himself come appraisal time and people will be incentivised to produce whatever it is that their bosses are measuring.

But there are a range of performance management approaches!

Agile performance relies on feedback; we want to reduce the feedback gap as much as possible by providing timely and balanced developmental feedback. I might be a little wary of having an open and honest feedback conversation with my manager or to enter into a coaching initiative when that manager is having listened to my strengths, achievements, vulnerabilities and development needs is going to rank my performance later in the year.

More than one source of feedback

Aha! The crowd sourcing feedback method, a useful approach for seeking feedback on team members that work remotely. Recognition coming not just from managers, but from a person’s other work connections is valuable in this context, but is it reliable? Am I able to provide open, honest developmental feedback – certainly there are indications in the public sector of individuals seeking feedback frequently as a method of influence and perhaps protection from a low ranking on the bell curve.

Individuals are overwhelmed with feedback requests a feedback for the sake of feedback culture is undermining feedback as a developmental tool is this an agile approach or is this a fragile approach to performance management?

I recently worked with a team in the manufacturing sector where highly skilled teams use state of the art equipment to build products. In this environment skills matter more than hierarchical power hence their approach to skills and capability development was agile, relentless in its ambition to remain ahead and to develop a fair, objective and responsive approach to performance management.

As a result competencies in this organisation are tightly integrated with development planning and key performance indicators which are evaluated regularly by the strategic team.
In order to encourage collaboration a profit sharing approach rewards the work of large teams. This reward system supports an Agile environment, and an additional benefit is that this approach encourages knowledge sharing by rewarding people for influencing the success of areas they do not control

During interactions with our customers I notice that an agile performance becomes fragile or impossible in those organisations that use metrics to set targets for very long periods, typically 3-6 months. Agile methods enable response because much shorter timescales are set for review, intelligence is fresh and people performance is consistently evaluated for evidence of contribution via competencies that were enablers of change.

The greatest danger in times of turbulence is not the turbulence; it is to act with yesterday’s logic. – Peter Drucker

Getting Results From Performance Appraisal